Background
Amyotrophic lateral sclerosis (ALS) is a devastating neurodegenerative disease of upper and lower motor neurons affecting ~1 in 400 individuals and for which there is no curative treatment. It is the most common midlife neurodegenerative disease. The genetic architecture of ALS remains to be fully elucidated. Risk genes discovered to date have variable penetrance, indicating that ALS is a “simplex” disease, underpinned by highly-penetrant, rare Mendelian (“simple”) mutations and common, modestly penetrant variants, typically discovered in “complex” diseases. Little is known about the role of these genes in disease pathogenesis and representative cellular models for ALS do not exist. Our collaborators at UMCU started Project MinE (www.projectmine.com), an international collaboration to pursue large-scale whole genome sequencing in both familial and sporadic ALS. Initial studies from Project MinE have identified two novel ALS “risk genes”, C21orf2 and NEK1. The aim of the current project is to identify causal mutations in these novel ALS risk genes and to create a new and relevant ALS model that enables a deeper understanding of ALS pathogenesis.

Methods
Our preliminary results show that C21orf2 and NEK1 are expressed in spinal cord motor neurons and in other motor circuit neurons (DRG, Purkinje cells). In addition, the protein products of these two genes interact in vitro. The project aims to characterize the subcellular localization of these proteins in relationship to specific cell signaling pathways and cellular organelles. We will also determine the interactome of both proteins. Using stable cell lines and primary neuronal cultures, we plan to perform functional assays to characterize the roles of C21orf2 and NEK1. These functional assays allow us to identify candidate disease-causing mutations in these genes identified in Project MinE. We further test the function of these proteins and their mutant variants in human induced pluripotent stem cells (iPSC)-derived motor neurons. This in the longer term will allow for the generation of in vitro high-throughput screens of ASOs or chemical compounds as possible therapeutic agents for ALS. 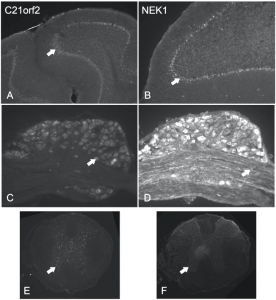 Relevance
Elucidating the biological processes that lead to ALS will help to improve available disease diagnostics and lead to the discovery of new treatments that can slow down or halt the disease, and potentially pave the road for preventative and precision medicine approaches.