Amyotrophic lateral sclerosis (ALS) is a fatal neurodegenerative disorder with a lifetime risk of 1:400, affecting upper and lower motor neurons. This loss of motor nerves leads to weakness of the skeletal muscles, ultimately resulting in death 3-5 years after diagnosis due to respiratory failure. At present, there is no effective therapy for this devastating disease. To accelerate the search for new treatments, advanced humanized in vitro models are needed. Such models will help us to unravel disease mechanisms and will enable screening for new therapeutic compounds in a disease-relevant model.

One of the key players in ALS pathogenesis is the synaptic connection between the motor neuron and skeletal muscle, the so-called neuromuscular junction (NMJ). Evidence has demonstrated that NMJ defects are already detected prior to the development of clinical ALS symptoms and motor neuron degeneration. Although the exact pathological events leading to NMJ denervation and axonal degeneration remain to be explored, mitochondrial dysfunction and impaired transport of organelles and RNA have been demonstrated to be involved in ALS pathology. In addition, non-neuronal cells such as glial cells and skeletal muscle cells have been suggested to be toxic towards motor neurons, thereby contributing to the progressive degeneration of neurons in ALS patients.

The goal of this project is to investigate how non-neuronal cells contribute to ALS progression such as NMJ denervation and axonal degeneration. To achieve this, a NMJ-on-a-chip will be developed, which is an in vitro model, containing motor neurons and skeletal muscle cells in a microfluidic device. This microfluidic device consists of two chambers that are connected via microchannels. Motor neurons are plated in one compartment and muscle cells in the other, whereas axons grow through the microchannels to innervate the muscle cells and form functional NMJs. To develop a patient-specific and disease relevant model, microfluidics is combined with stem cell technology. To advance complexity of the model, glial cells, such as astrocytes and microglia, can be added to the neuronal compartment creating a more spinal cord-like environment. This system allows the study of cellular toxicity of diseased glial and muscle cells towards healthy motor neurons, which will help us to determine how these cells contribute to ALS progression and degeneration of motor neurons.

Applying microfluidics and stem cell technology to model the ALS-on-a-chip will improve our understanding of ALS pathology, and will allow us to investigate underlying mechanisms, such as non-neuronal cellular toxicity, that contribute to motor neuron degeneration in ALS. Improved understanding of these disease mechanisms will help us to discover novel, effective treatments for ALS. 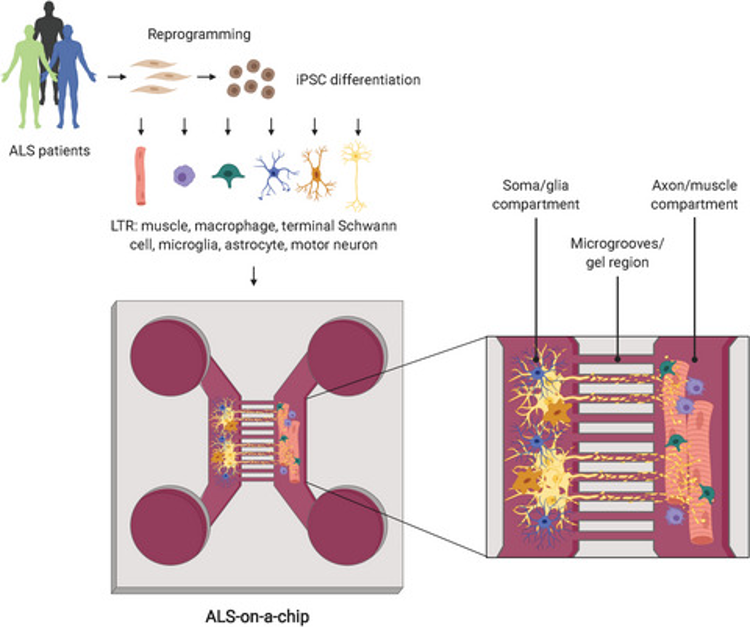 The neuromuscular junction (NMJ) is one of the key players in ALS and is affected early on in disease pathogenesis. To study the NMJ, advances in both microfluidic technology and stem cell biology have jointly been used to develop ALS-on-a-chip models. Stem cells derived from ALS patients can be used to generate motor neurons, skeletal muscle cells and other cell types, such glial cells, to subsequently culture in a microfluidic device. Due to the compartmentalization characteristic of the device, motor neurons are cultured in one compartment and muscle cells in the other, whereas axons can grow through the microchannels to innervate the muscle cells and form functional NMJs. This model opens up new avenues to study NMJ function and the processes that contribute to NMJ denervation and motor neuron degeneration. Moreover, the inclusion of other cell types, enables to specifically study the contribution of each cell type to NMJ dysfunction.